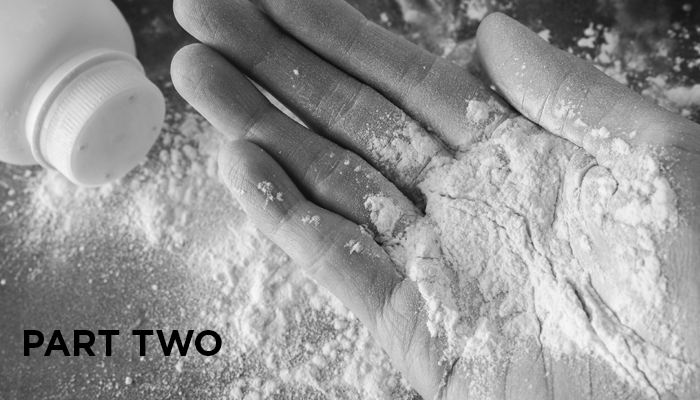 As we wrote in a previous post, talc litigation has been a hot topic at every conference we have attended in the past year. In this post, we take a closer look at verdicts.

Last week, The Wall Street Journal published an editorial about recent developments in talc litigation, including the recent reversal of a $417 million plaintiff verdict in California.

Los Angeles is one of two places — St. Louis being the other — where large plaintiff verdicts have been handed down for cases in which women with ovarian cancer claim the disease was caused by their use of talcum powder over many years. St. Louis has seen five verdicts since the beginning of 2016 — four plaintiff verdicts and one defense verdict. The first, in February 2016, was in favor of the plaintiff for $72 million. The most recent was in May 2017 for $110.5 million. The Los Angeles verdict was ruled just this past August. It was comprised of $70 million compensatory damages and $347 in punitive damages.

The appellate judge for the Los Angeles case granted the defendant’s request for a new trial due to legal issues between the entity being sued and the entity that manufactured the product, as well as how a holding company can be held liable for a subsidiary. In reversing the verdict, the judge also said the actual evidence linking talcum powder to ovarian cancer was lacking — and that even the plaintiff’s own expert testified as much. Although the plaintiff’s attorney brought an epidemiologist to testify in the trial, the judge said the expert “did not properly employ the methodology she espoused.” Finally, the judge’s opinion was that the lack of support and evidence linking the powder to the cancer made the awarding of punitive damages inappropriate and the compensatory damages just “plainly excessive.”

In addition, this past week, the February 2016 verdict in St. Louis was also reversed on appeal. The appeals court decision was based on the personal jurisdiction issues determined by the U.S. Supreme Court earlier this year. The Missouri court ruled that the case should not have been heard in St Louis, because the plaintiff didn’t live in Missouri, nor did the claims come from the defendant’s activities in Missouri.

As The Wall Street Journal notes, after such large verdicts, plaintiff attorneys were hoping for a mass global settlement, potentially worth billions. But with the legal and causation issues brought to light by the appellate courts, plaintiff counsels may end up getting little to none in the way of settlement or verdicts.