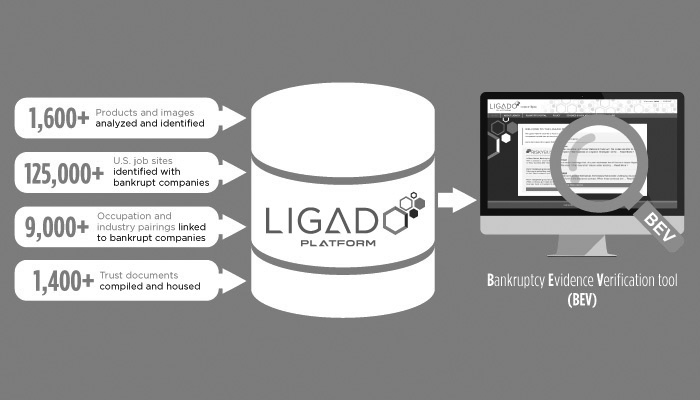 KCIC is excited to announce the latest addition to its industry-leading Ligado Platform: BEV, our Bankruptcy Evidence Verification tool.

More than a year in development, BEV enables you to quickly see if a product from a bankrupt company may have been a source of exposure for a plaintiff. In other words, BEV keeps within the Tort System evidence of bankrupt companies that made asbestos-containing products.

Each year, more than 8,000 U.S. companies are named on complaints alleging exposure to asbestos-containing products. According to KCIC research, an average of 68 entities are named on each complaint. However, that number does not include any bankrupt companies.

There has been a steady stream of bankruptcy filings over the last 30 years — starting with thermal insulation asbestos defendants and up until just weeks ago, with Kaiser Gypsum. But as defendant companies have gone into bankruptcy, protections afforded by Chapter 11 and the subsequent Plans of Reorganization have meant those companies are no longer named on complaints.

As litigation proceeds, formal questions are put to the plaintiffs in the form of interrogatories. In most jurisdictions, these are standardized and include an exhibit detailing the work history of the plaintiff, job sites where they worked, their employer at the time, and, to the extent known, the asbestos-containing products to which they allegedly were exposed. Logically, one would think that the products of the bankrupt companies would continue to be identified on these interrogatories post-bankruptcy with the same regularity as they were pre-bankruptcy. But that is not the case. Studies by the Rand Corporation and Bates White Economic Consulting, as well as the landmark findings in the Garlock case, show that bankrupt companies vanish from interrogatories post-bankruptcy.

Given that bankrupt companies are no longer named on complaints and have disappeared from interrogatories, the best, and last, chance to obtain a plaintiff admission of product exposure is during deposition questioning. In the tort system, this is generally the evidentiary standard needed for a potential share of the verdict. But again, studies show defense counsels often do not pursue this line of questioning. Many reasons are cited, but a major factor is overwhelming logistics — dealing with the thousands of sites and products of the bankrupt companies.

BEV solves the logistics conundrum. KCIC has gathered the publicly available information from the Asbestos Bankruptcy Trusts into a single searchable database with an intuitive, easy-to-use portal. This includes over 125,000 U.S. job sites, normalized to account for inconsistent naming between trusts; plus over 9,000 occupation and industry pairings; over 1,600 products and images; and over 1,400 trust documents. And that’s just a start.

BEV puts into the hands of defense counsel the ability to uncover — based on work history, industry or occupation — product names and pictures of products to which the plaintiff may have been exposed. These can be searched and researched in a variety of ways, and defense counsel is then able to generate an easy-to-use report to assist with more targeted deposition questioning. The tool can also be used, in real time, during depositions, allowing exploration of other potential product exposures based on testimony.

BEV also can be used beyond the deposition. During settlement or trial, BEV can serve as a repository for other evidence of exposure to bankrupt companies’ products — for instance, using site diagrams and testimony of other plaintiffs from the same site, location and time period. BEV is where defendants can collaborate and share evidence to their mutual benefit. (While there may be a self-preservation interest that discourages collaboration between defendants when they seek to shift shares between solvent companies, there is every reason to collaborate in establishing shares for bankrupt companies. Every solvent company stands to benefit when a share can be attributed to a bankrupt company.)

Certainly, getting shares for bankrupt companies on verdict sheets in the tort system is the "promised land" for BEV. The tool also is designed for fluid and seamless identification of potential recoveries from the Bankruptcy Trusts. All of the Trust Distribution Procedures and payout percentages have been integrated into BEV, along with the lower evidentiary standards needed to make Trust claims. While less valuable than a share in the tort system, in total, the potential recoveries from the Trusts can still be a significant offset to a defendant's liability.

What is clear is that plaintiffs have every incentive to exclude a bankrupt company from evidence and strong disincentives to include them in evidence. Even in the case of the recent filing of Kaiser Gypsum, we noticed a mysterious drop off in the frequency with which Kaiser Gypsum has been named on complaints, presumably in anticipation of bankruptcy. The rate at which the top five plaintiffs’ firms named Kaiser Gypsum on complaints in 2016 was less than half the rate in 2015. Whether as a result of criminal intent, as has been alleged post-Garlock, or for other reasons, we can expect Kaiser Gypsum to disappear from evidence. BEV is designed to be a potent weapon in this fight — for keeping all bankrupt companies in evidence.

KCIC will be introducing BEV at the DRI Asbestos Medicine Conference in New Orleans this week. If you plan to attend, please look for the KCIC table outside the main conference hall.