4/15/2020 By Jonathan Terrell and Carrington Austin

Warren Buffett released his highly-anticipated letter to the shareholders of Berkshire Hathaway on February 22nd. I have been a lot slower than usual in commenting on it because it is, in truth, quite dull this year. However, one significant change did catch my attention. Since the year 2000, the annual letter has opened with a table including the year-on-year and aggregate change in Berkshire’s book value per share. The 2019 report is notably missing that table, and in fact, that term, entirely.

In the Berkshire Hathaway Owner’s Manual, first published in 1996 and updated in 2018, Buffett provides this simple definition of intrinsic value: “It is the discounted value of the cash that can be taken out of a business during its remaining life”.

He notes that the actual calculation of this number is not as simple as the definition implies. It is dependent on interest rates, forecasts of future cash flows, and who is analyzing the figures. In that same manual, he further explains that book value per share can “serve as a rough, albeit significantly understated, tracking measure for Berkshire’s intrinsic value. In other words, the percentage change in book value in any given year is likely to be reasonably close to that year’s change in intrinsic value”.

However, just one year later in the 2018 letter to shareholders, Buffett provides three reasons why he believes book value per share has lost its value as a tracking measure for intrinsic value and why they are abandoning the practice of using it as such:

Points 1 and 2 do not really make sense to justify the change in 2019 as they have been true of the Berkshire business for a long time, and nothing particularly special happened in 2019. It is also a fairly straightforward calculation to normalize for the stock buybacks. 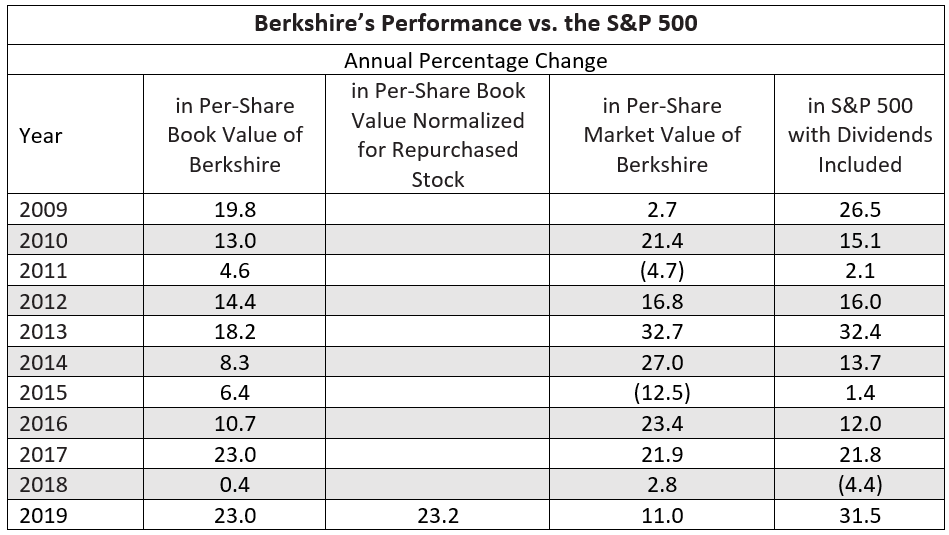 But if that is not a good measure… what is? While the 2019 letter was notably missing book value per share, it was also missing a solid alternative for deriving intrinsic value. The 2018 letter to the shareholders said, “over time… Berkshire’s stock price will provide the best measure of business performance.” Then, the 2019 letter makes no mention of stock price as a proxy for intrinsic value, and instead diverts the reader’s focus to operating earnings.

In this uncertain and volatile market, none of these measures are going to be attractive in the near-term. An accurate calculation of intrinsic value is dependent on sensible assumptions and precise forecasting, and it is going to favor those who can gain a competitive advantage in the months and years to come. I am in favor of sticking with the simple measure of book value per share, and will continue to supply this calculation, normalized for stock repurchases, in future years too.